Home The Wainwrights in Colour Not such a Happy New Year.

Not such a Happy New Year.

I suppose everyone wants to start a new year being positive and looking forward to what lies ahead, so it was for me, as we moved into January I was very upbeat, the sketches were nearly all compete for the Wainwrights in Colour project and the book was all but done. Sadly however for me things didn’t work out as planned. Just after the start to the year my 86 year old mother was diagnosed with a terminal illness and sadly she passed away within a matter of weeks. Thankfully she didn’t suffer for too long and she is now at peace. Due to this bereavement I not only stayed away from social media and also from posting here on my websites. I must thank all of you who contacted me to send their condolences, they were very much appreciated during this difficult time.

Consequently I have to admit that during these initial weeks of the year my mind was elsewhere and my heart was not really into my work. I did however carry on with editing the book even though I was not able to concentrate on any painting at all which is unusual for me. However, during this past week things are getting back to normal but understandably this has set back the publication of the book by a few weeks but I hope that all those who have been waiting patiently for its launch will forgive me for this extra delay.

In the meantime I have been adding extra detail to the pages of the book and tightening up the design and layout of the pages.

Wainwright himself developed the look of the Pictorial Guides over their production (some explanation of which I have included within my volume) and by going down the self publishing route like AW I have the freedom to produce a book that I think compliments not only my sketches but also pays homage to Wainwright’s original works. Those original guides were exactly to his design and layout, he had a reason to place each sketch on a page and at the size that he felt was suitable. Even though I am using a computer program to place my images and text on each page I would like to think that the end result will, like the Pictorial Guides, be seen as one persons dedicated work and not a product of an editors ideas. It is a little know fact that early on when AW was formulating the Pictorial Guides that he considered producing the book as a Limited Edition run and idea which he thankfully dropped but I will carry on with my plan to produce just a single run of 5000 copies . I am pleased to say that due to the interest in my book about 20% of the print run has already been allocated to those who have sent me their details via email, and this is prior to any media promotion. Self-publishing is a huge gamble but hopefully I will not be left with a huge pile of unsold books under my bed.

One other small detail to share is that I have decided to change the colour of the book cover, it is only a minor detail but after a bit of careful consideration I have opted for a nice rich blue as a background colour, I hope you like it. Full details of the book can be found here 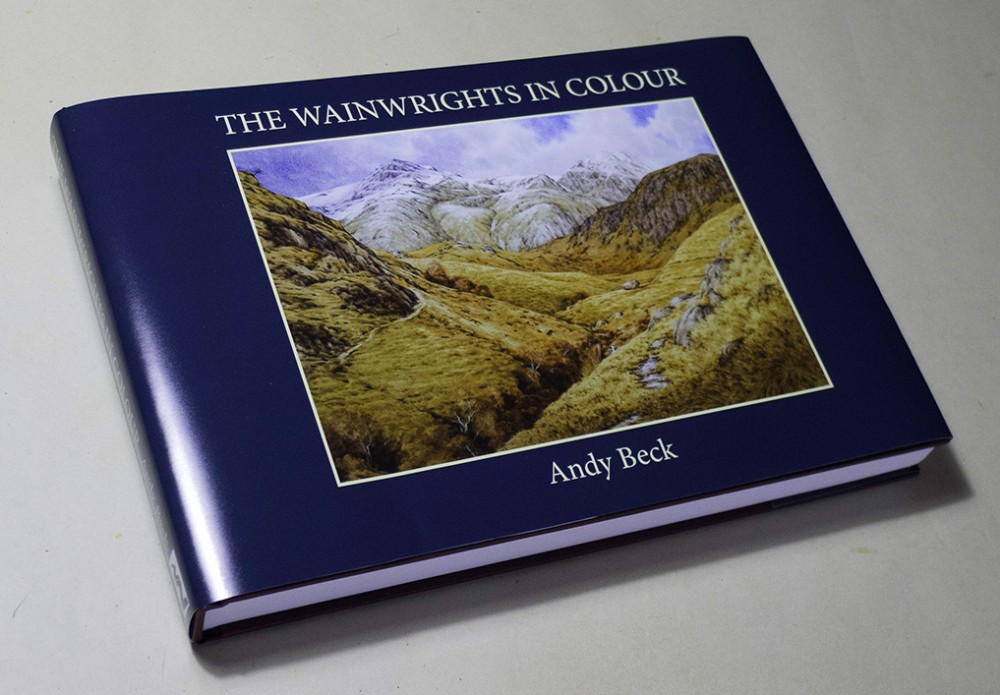 If you have not already done so, feel free email me if you are interested in obtaining a copy: info@andybeckimages.co.uk

More updates will be posted shortly about the Wainwrights in Colour project,