Home News Talking with a passion

Talking with a passion

Well that was fun!

We have just returned from a couple of days over in Ambleside where, as you may have read in my previous post I was there to give talks on my Wainwrights in Colour project as part of the Festival of the Fells. The idea was to be part of this event which was to encourage visitors to support the attractions and businesses in this pretty town in the heart of the Lake District which were badly affected by the floods of last December. I was happy to provide my services free of charge and Andrew who runs the venue Mr H’s tearoom put in all the effort by making the coffee and baking the delicious cakes so it was only fair that he took the admission fee.

Friday started as a beautiful autumnal morning and the view from the B&B was simply stunning as the mist floated through the valley as the sun rose. 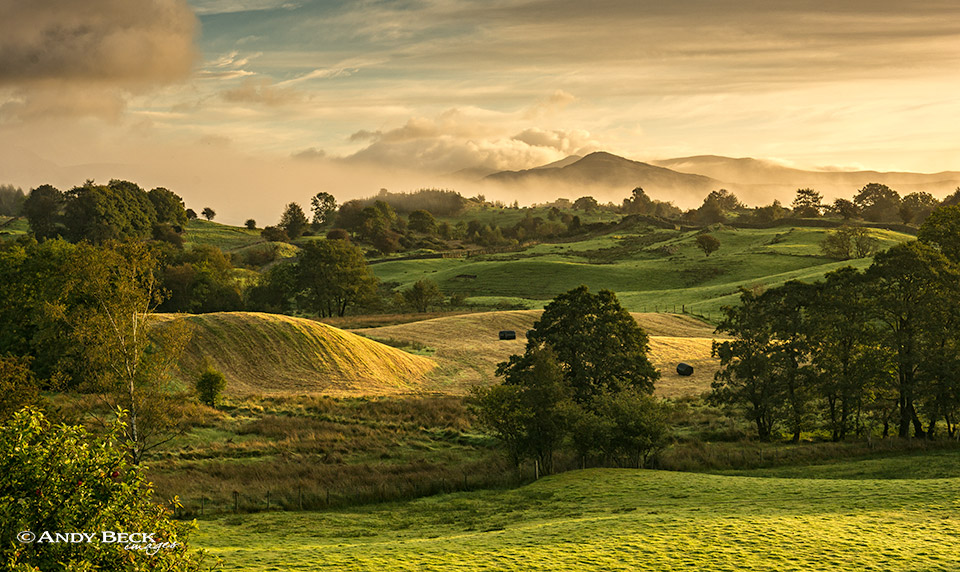 After hearty breakfast we set off for Ambleside. This was the first time that I had been asked to give this talk on the Wainwrights in Colour and after getting the room organised and the projector set up we were ready for the first event.

The venue was small so the audience numbers were limited but this made for an intimate event which was advertised for a 90 minute slot. It is perhaps due to the training that I had in the R.A.F. Regiment that standing up in front of an audience doesn’t phase me at all and this small venue with the close proximity of the listeners allowed me to interact with them and take questions. I find that talks given by speakers who just stand on one spot and read off a ream of notes with no connection to his assembled guests are boring, even if the topic is something in which I have a great interest. Anyone who knows me will realise that even after 10 years I still have a real passion about this project and I am able to present my experiences in what I hope is an interesting and inspiring manner- all without notes and connecting with the audience using humour and knowledge is a main part of keeping them entertained. 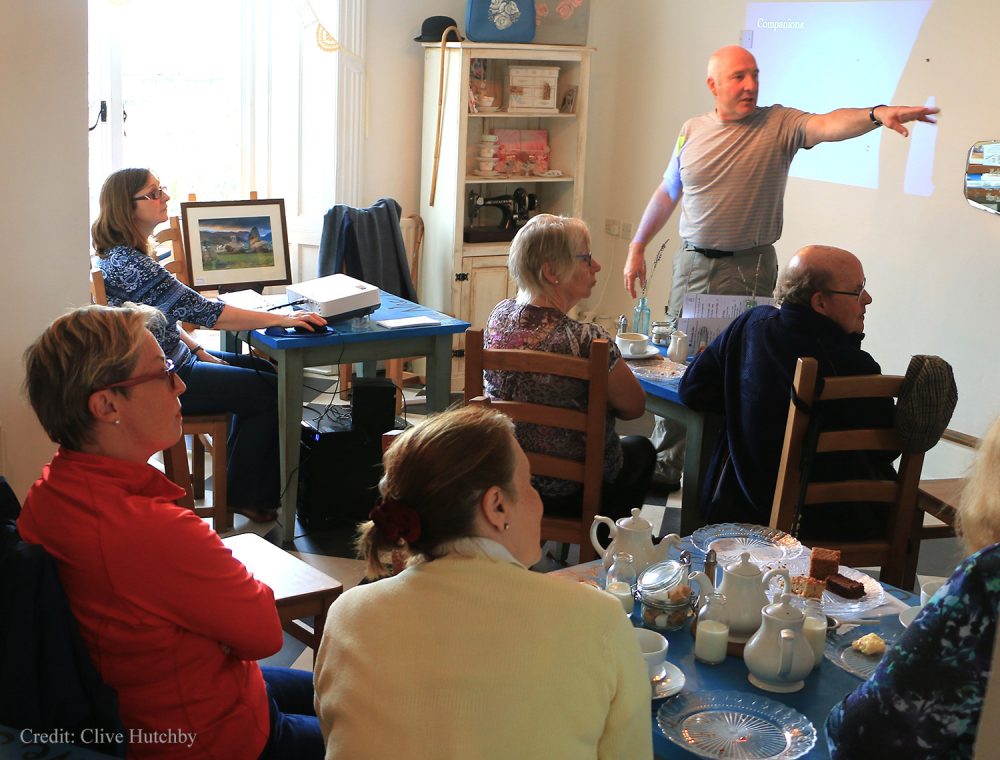 I broke the presentation into 2 sections with a short break in the middle. The first part was on the Wainwrights in Colour, the development of the idea, the planning, obtaining the 1500 references and the artwork. The second section was information about the forthcoming book. The original idea was that this talk would have been to promote and sell the book but those who have been following me for the year will realise that the publication has had to have been delayed but word on the publication date will be published soon.

It seems that the talks were received by the audiences on both days, well I didn’t see anybody nod off, perhaps the caffeine in the excellent coffee kept them awake.

My time throughout the day was spent around the town centre chatting to members of the public about my project and meeting up with fellow speakers at the festival such as Alan Hinkes and John Phoenix Hutchinson . 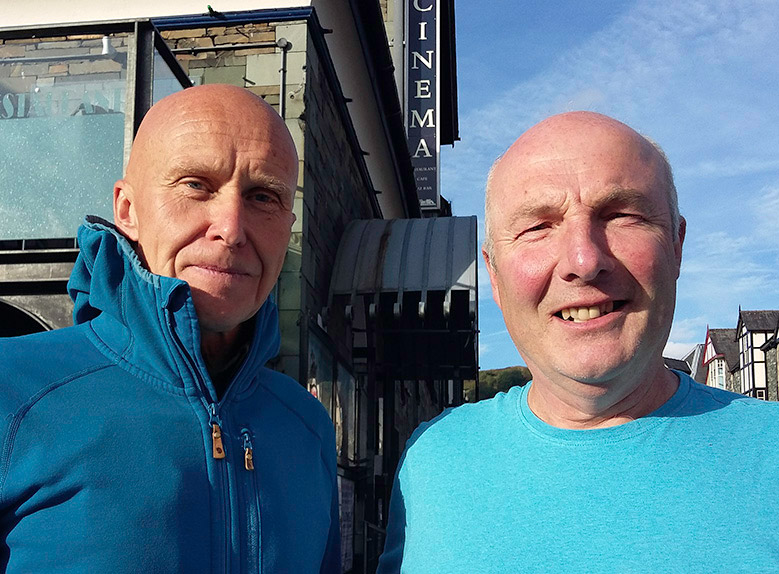 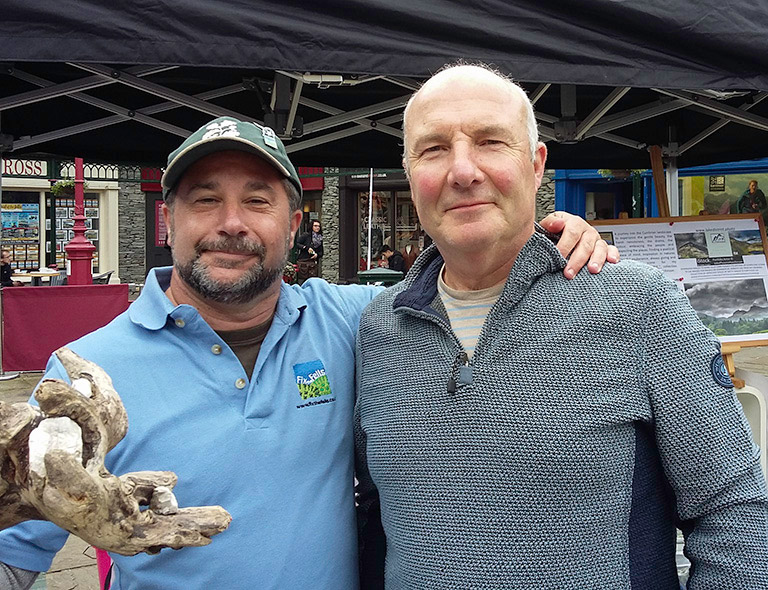 It was also a great opportunity to catch up with fellow fell walking friends and attend other events ourselves as part of the audience.

All in all it was a great couple of days away and I did learn several things about the project myself. It seems that many people do not fully understand the complexities of this massive and unique undertaking, many details of which I will not have room to explain in the Wainwrights in Colour book. Only by using this blog or by giving talks such as at this event will I ever be able to expand on the amount of work that has gone into the whole Wainwrights in Colour project. So shortly I will begin a series of posts on here about the complications of the task. I am of course available to give talks such as the one for the Festival of the Fells but only once the book is published. If you are interested in hosting such a talk for your walking group, friends etc then do get in touch via email: info@andybeckimages.co.uk

Thanks to Clive Hutchby and the team for organising the event and asking me along. Good luck to them in the future.